Also called "lost wax casting", investment casting is the process to turn a wax model into metal. Ninja Magic's prototyping machine has been designed primarily for the jewelry industry and the models it produces are made out of a hard wax, which is extremely well suited for investment casting.

To turn a wax part into metal, first a sprue is attached to the part. The sprue is a tube of wax varying in thickness depending on the part, but on average is about the same diameter as a pencil.

Then the part is suspended by the sprue within a metal container, called a flask, which is then filled with a plaster-like slurry. The wax part is encased in a rigid mold when it hardens, and the flask is put into a kiln and heated to temperatures in excess of a thousand degrees. This causes the wax part and its sprue to "burn out" leaving an empty cavity in its place.

The sprue now forms a tunnel to the part and molten metal is poured in. When the metal cools, the mold is shattered and a perfect metal copy is extracted - if everything goes well.

This is why it is an "investment cast," the original part is destroyed as an investment to create a more valuable metal copy.

With this process, there are certain caveats and limitations imposed on the design of the part being prototyped that should be understood when submitting a part for a quote. 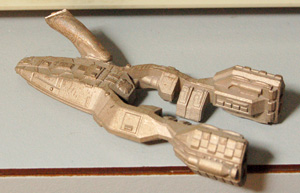 When a sprue is attached to a part, and it is left up to the investment caster, the end is melted and it is mashed onto the surface. This causes two problems - first it obliterates any details in the area of that attachment point, and second, the lumpy connection that results is impossible to cut off and grind back to its proper shape on a finely detailed miniature. 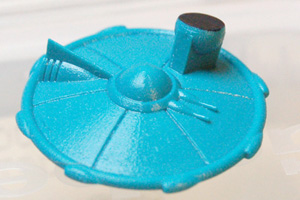 To curb this problem, Ninja Magic attaches what we call a "sprue hard point" to the model before prototyping. This hard point is usually a cylinder or box booleaned into the model and the caster's sprue is mashed against it instead of the model itself leaving a relatively easy connection point to clean up after casting. 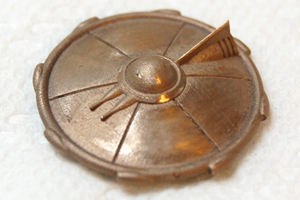 This means that, as a customer, you can not decide you want a part investment cast after it has been prototyped. Without the sprue hardpoint, it is in Ninja Magic's experience that the part will not turn out acceptably.

The other caveat to this process is that the model has to be designed in such a way that there is a place on the model, devoid of fine detail, accessible by means of a hacksaw, and be thick enough to allow proper metal flow into the cavity of the mold during investment casting.

Ninja Magic can be very creative in terms of how the hard point attaches, and even the shape of the hard point to work around certain details. If your model poses casting issues, we will offer suggestions to alter the model if that is what's necessary, but it helps to know these issues and design the models with them in mind from the start.

Lastly, it is best if parts to be investment cast are able to fit within a cylinder 2 3/4" in diameter and 6" long. This is a limit of the largest flask size the investment caster Ninja Magic uses. It is possible to investment cast larger pieces but bear in mind that there could be delays getting that done.