A prototyping machine is a wonderful piece of technology, but unlike the replicators from Star Trek, these machines have limitations as to what they can build.

Prototyping machines prototype single objects, not assemblies of objects. A single bolt is fine and a single nut is also fine. But a nut screwed onto a bolt and prototyped as an assembly will fail. Therefore do not send assembled models, instead send one or more files that contains each of the parts separated from each other. 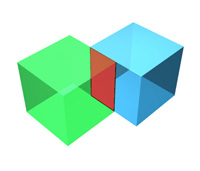 The sides touching are coplanar.

Most prototyping machines, like Ninja Magic's, will only output parts that consist of only one surface without any open seams, and without any co-planar or intersecting surfaces. 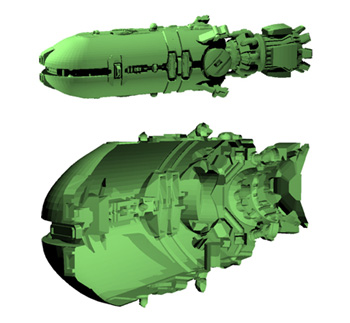 The model must be a single surface.

Open seams are holes that breach a surface, not holes that go through an object. A donut (torus) is a perfectly valid object to prototype - it doesn't matter that there is a hole through the object, it just matters that its surface is unbroken and has no open seams. If it were a real object filled with water, the water would not spill out. Such models are called "Watertight" and is often the requirement of object to be prototyped.

No open seams. This model also has polygonal tessellation problems.

Co-planar surfaces are where two surfaces butt up against each other and touch. This makes the software confused because it can't figure out where one object ends and the other one begins. Even if both objects are valid, if they touch each other at all it will cause the process to fail. This is why the nut/bolt example above, and other assemblies of objects will fail.

Since computer models can pass through each other freely, doing so can cause problems when trying to turn it into a real object. Like co-planar surfaces, any surface which is passing through another surface (from two different objects or through itself) will cause the process to fail.

All of the various prototyping technologies have limitations, and Ninja Magic's machine is no different.

The material our machine makes models out of is very fragile. Particularly thin objects, or parts of objects, can break no matter how carefully they are handled, or even when the support structure is removed in the bath.