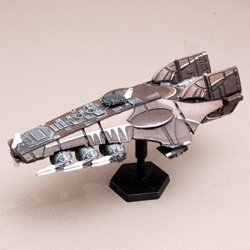 The audacity of the Kikaki Challenge made the Kumka Burrough re-think their displays of dominance. The lessons learned from that conflict were taken to their logical conclusion, and after ten years of development, the Tipaka was unveiled. This massive ship was a beacon of strength and power, and let the other kikoku nations know they could not challenge the Kumka Burrough financially or militarily.

Twenty-five years after construction, the great battleships were put to their first real test. In Patapsco, they were instrumental in protecting the evacuation of kikoku colonists as the human/jun-ila war of possession errupted around them. They also helped consolidate the kikoku holdings and protected them from being forcibly annexed by either of the sides. 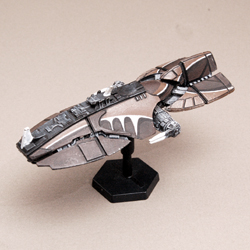 The Kito Kapak was one of two secret projects used to crush the will of the Kikaki Burrough during their challenge of dominance. The enormous carrier could single handedly provide air-to-orbital superiority as well as logistical command and control for ground operations over an entire planet.

The cost effectiveness of the ship is difficult to measure in human terms. As a tool for suppression it worked reasonably well, but as a psychological weapon, it did exactly what it was designed to do. When it appeared in orbit over the final battlefield, the Kikaki knew the Kumka Burrough's economy was far more resilient than they thought and relinquished their challenge ending the conflict. 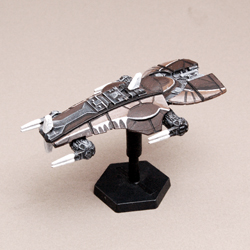 The Kotaku project was more than just the battlecruiser that bears its name, it was a program of advanced starship design to develop the next generation of Kumka warships. Their aging fleet needed to be replaced and for fifteen years new technologies emerged out of it that led to particle beam cannons and other advancements that used the Tak Kuta corvettes and Kapuki frigates as testbeds.

The cruiser's spine was laid the same week the Kikaki Burrough seized Kumka assets. In two years time, it would emerge as the most powerful cruiser ever made, sporting four massive particle beam cannons. Twenty years later the base model was refitted adding a second particle beam cannon to each turret, doubling its firepower and once again making it the most heavily armed cruiser in space. 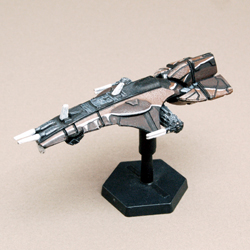 Designed after the Kikaki conflict was resolved, the Tiko was in essence a repackaging of the original Kapuki design. Built larger, it included a pair of particle beam cannons on its nose and even squeezed in a compact model of the barrage rocket launcher - an old weapon given new life with the advent of a new swarming rocket.

With increased point defense systems and the same particle accelerator turrets as the Kapuki, the well rounded destroyer has since become the de-facto escort for the Kotaku. 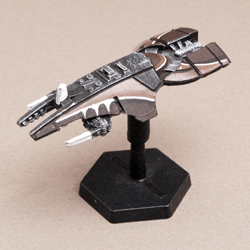 The Kapuki received lackluster response during its initial trials. In the haste to get the ship in the field, an unresolvable engineering problem arose that prevented the inclusion of a newly developed particle beam cannon. Its lateral turrets at the time of the trial also had only one of the two planned particle accelerators.

In the end, the engineering problem could not be solved and the cannon was left off, giving the ship its distinctive forked nose. Once the turrets held the pair of accelerators as intended, the ship met the approval of the First Tier. 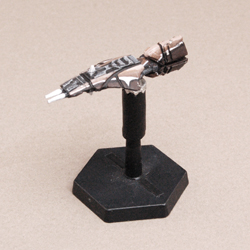 It is impossible to visit kikoku controlled territory without seeing Tak Kuta Corvettes on patrol. Produced in large numbers, these ships are almost exclusively enlisted into the service of the orbitguard and perform tasks such as search & rescue, traffic management, customs enforcement and anti-piracy.

Serving only four years as a cutter, the Tak Kuta received an upgrade at the start of the Kikaki uprising with the addition of a pair of particle accelerators in its nose. This turned the ship into a viable combat escort and was pressed into military service as a corvette. 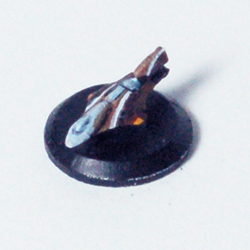 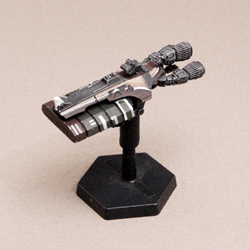 One of the side effects of the advanced starships coming out of the kotaku project was that the new starships used far fewer consumables compared to the days of old. Enormous and ponderous supply ships gave way to smaller, faster and more economical ships like the kikako.

During the Patapsco War, they were able to deftly slip through zones of conflict, delivering precious supplies to defensive fleets and the moons they were protecting. Though they are not capable of carrying heavy loads, the kikako had proven its worth and will be a common sight in kikoku fleets for the forseeable future.