Working On Ending The Hiatus

It's been a while. Too long in fact to post an update. These past couple of years have been pretty rocky involving two cross country moves, four different jobs, and a lot of struggle.

However, things are finally starting to stabilize and prospects are bright for me being able to come out of hiatus and get the ball rolling on getting fully back into business.

Many of the miniatures are now available again through Agents of Gaming, I've updated the link in the Where To Purchase section of the site. I can't bring all the products back yet, some of the kikoku ships need new masters and molds made and I'm not quite in the position to bring back production of the magnetic adapters just yet. Some more pieces need to fall into place before that can happen, but I hope to get them back sometime this year.

Development on With Hostile Intent has been continuing all this time, albeit slowly, and some regular playtesting is about to begin that should fast-track the game to completion. With any luck, that too could be published this year but we'll have to see.

There is now a
[read more]

I've just added some official forums which visitors can get to by following the Forums menu link on the left. The forums are not hosted on the same server as this site and I don't have control over the registering requirements so if it's a bit of an experiment.

The forums will become the outlet for the latest information, but I will still post important news here as needed. It also will not end the yahoo group as the yahoo group harbors many files which would not be host-able on the forums. However, I expect whatever discussions happen there will gradually migrate to the forums.

New products are on the way - the 180 degree adapters, 2-post and 3-post counter stands, as well as a new Adapter Alignment Key (for aligning adapters accurately to the flight stands as they're glued).

I will be updating the website with images of these new products as soon as I can.
[read more] 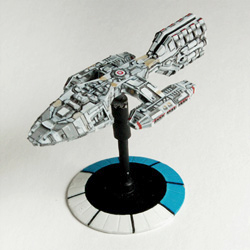 The Protector is now available for purchase and I've just added it to the Hyperdyne Astronautics page.

Additional products will be coming soon - 180 degree adapters, and 2-post and 3-post counter stands. I'll probably get those ready for sale after Gen Con.

NEWS
Gen Con - Ninja Magic is going but due to a glitch within the GPA, whom I normally buy a booth from, I was unable to secure a booth for myself. So this year the plan is to have my products at the GPA Showcase booth. I'm working feverishly to figure out my display such that I take up as little room as possible while still having enough signage that people can find me - not an easy task.
[read more]

I can't believe it's been over a year since I last updated the page. Certainly there were times when I could have worked on it and didn't, and many times when it was lingering in the back of my mind but I simply had too many higher priority items to take care of.

It's also been a rather topsy-turvy year, having been laid off and transitioning to a stay-at-home-dad status - which you'd think would give me more time but it really doesn't when you have twins. Money has been tight too so a lot of Ninja Magic development plans have had to be shelved temporarily.

Don't ever take a lack of updates on this site as an indicator of a dying idea or a failing company though. It is almost always an indicator of me simply being too busy and there's only so much one guy can physically do day to day and week to week.

Work on With Hostile Intent has been progressing and I have released some new products over the last six months - more on that below. Sales have been good this year, and I had the best Gen Con ever (sadly I was unable to attend Origins mostly due to needing to be home with the kids while my wife worked.)

Also in production is the kikoku and jun-ila fighters - the Kakum-28 Starfighter and ISM-90 Drone respectively. When I get a chance, and get a few other priorities out of the way, I'm going to work out fleet sets for these two species.

Lastly, new multi-use flight stands are available. A lot of design considerations went into them and I've tried to make them the best all-purpose flight stand ever made, so check them out in the accessories section.

NEWS
The Kikoku Kikako Auxiliary ship is temporarily unavailable as a new model is needed for making a new mold. This ship should be back in production within a couple of months.

Molds are being made of some of the new counters so they should be back in inventory sometime within the next month or two as well. At present there is the following inventory of the old counters left:

All other counters are sold out.

Jun-ila and Kikoku fighters as well as the new mines, missiles, torpedo and plasma counters are in the moldmaking stage. The Satellite and Escape Pod counters are still in progress.

Lastly, painting tutorials have been posted on the site with more to follow (eventually), and some pictures have been updated in the fleet lists. The Photos section also now has pictures in it and ones that help show the scale of the various miniatures.


In addition, the following products are available as supplies last, but will be discontinued as well when they do. (there are still significant supplies of these items still in inventory so supplies will last a while longer):


The reason for this discontinuation is that all counters across the board are undergoing a revision to the basing scheme. They are essentially going to become multi-part miniatures. The overall effect of this change won't significantly change the look of the counters, but will greatly simplify casting and will provide customers more flexibility to mount them differently if they prefer.

Since the molds of a lot of these items are worn, there is limited supply remaining, and they don't sell in great quantities, temporarily discontinuing them is the logical choice. If all goes well, the new versions of these items will become available again within a few months.

We apologize for any inconvenience.

For the past week I've been working with tech support trying to solve a problem with the prototyping machine. If the final attempt tonight does not work, then the machine will need to be shipped back to have some engineers look at it.

Dealing with these issues have delayed my efforts to get the micro-adapters ready for sale, as well as other important items on my list to do...like sleep.

Some areas may appear to be incomplete, maybe with broken pictures or odd partially written paragraphs, but that's because there are still some core pages still being worked on.

NEWS
Production castings of the new micro-adapters are in-hand and have gone through their final checks. As soon as pretty pictures of them can be taken and the packaging/assembly instructions squared away, they will become available for purchase. Likely this week!

Welcome to the new Ninja Magic website! The old website was hand coded and difficult to update with new information, pictures, and whatnot. This is why it has languished in lack of updates and largely unhelpful to visitors.

Now, the site can be updated much more easily with most of the mind-numbing programing bits automated through a content management system. I can now concentrate on adding content instead of wrestling with html!

Keep an eye on the site, I hope to have changes and additions every week.